Getting to know - Pehuén Rodriguez 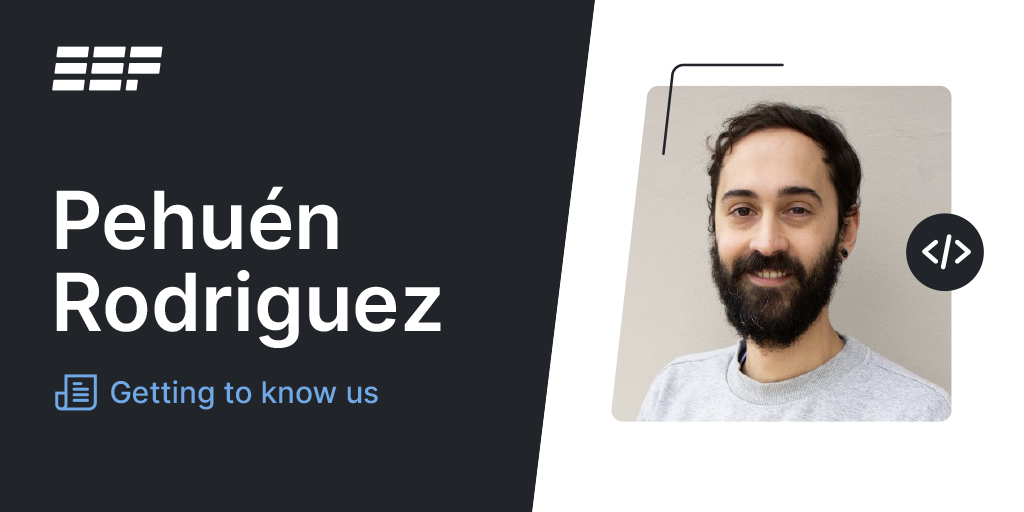 Welcome the first edition in our "Getting to know us" series. "Getting to know us" consists of articles and interviews about a wide variety of people in our ecosystem, with the main goal of making their work with BEAM technologies visible. Some have been around a long time, while others may seem new to you, but they all share a love for this ecosystem. If you know of interesting work that deserves more visibility, let us know at marcom@erlef.org !

Getting to know Pehuén Rodriguez

Pehuén Rodriguez is an Argentine 34-year-old software developer and artist with over thirteen years of experience. He’s also a partner at Nayra, a digital development cooperative. He “speaks” OOP, some C++, Javascript, SQL and no-SQL, among others.He has been interested in BEAM technologies for a while now, and nowadays he’s specializing in Erlang and distributed systems at NextRoll.

Pehuén’s professional career started when he decided to study Systems Engineering at UTN (Universidad Nacional de Tecnología). He got his first job in a big company thanks to the university internship program; there, he was in charge of the interpretation of local needs and their translation in terms of requirements/development. After a few years, paradoxically, he decided to pause university and focus on his job. He spent five years in the same company until one of his future partners at Nayra cooperative asked him to join them, which he agreed happily. At the same time, he decided to explore his creative side by studying Visual Arts. Although he was really enjoying this new career, he felt like there was something that still didn’t quite fit, so he dropped it and kept searching. After a while, he ran into Electronic Arts, a career offered by UNTREF (Universidad Nacional de Tres de Febrero), where he managed to bring his interests together. He fervently believes that creative thinking is a fundamental part of his profession and that all the way he traveled led him to where he is now. He has even resumed Communications Systems Engineering this past 2020.

First steps on the BEAM

One of Pehuén’s first projects at Nayra was a Canadian reservation and ticketing platform, where he was professionalized in Node.js. There, he also had the opportunity to observe some features and tooling being developed in Elixir. And so, the seed of interest was planted. It grew up with readings and learning projects and, in the early 2020, a friend cooperative proposed to provide training in Phoenix together: learning with friends to help others learn was more than enough incentive. He didn’t have to think twice.

Pehuén noticed that the declarative approach of functional programming is for him far more expressive and suitable to solve complex problems than the imperative way of the OOP. The other thing he realized was that with Erlang/OTP, the error handling logic was completely different from what he was used to: the “let it crash” approach allows him to focus on the current scenario instead of trying to anticipate any unknown. You may think in terms of multiple related loosely coupled processes, each of them working as independently as possible. As he’s learning of his new project and colleagues, that together with the supervision logic, enables for distributed systems to run reliably and keep on responding, even when some pieces may malfunction or crash. Ultimately, the thing about BEAM technologies and what they bring to the table is that, once you get them, you realize that they work as a philosophy. A philosophy in which he truly believes.

Keeping the fire on

Pehuén thinks about himself as a newborn in terms of BEAM technologies, and, as such, the most basic thing still amazes him. However, he knows that the stages of infatuation are usually brief. For him, learning and movement are the way you manage to keep things interesting. He recently read about the Nx project and its thrive to use BEAM technologies to support numeric intensive AI-related processes. It’s amazing when technologies evolve and create tools that transcend their traditional scope. He could never get bored of this.

As one of Nayra’s projects, Pehuén started working at NextRoll this March. There he has been working with systems that are huge and have many implications. Additionally, and because of their size, these systems are being hosted by AWS with a logic that is entirely different than everything he has ever seen. If there is something that Pehuén is doing at the moment, that is getting out of his comfort zone: he is focusing on learning, reading about Erlang, OTP and good practices while putting into practice that knowledge at the same time, slow but steady. Pehuén is facing one of the biggest challenges of his professional career. And he couldn’t be happier.

As a cooperativist, work and personal life are almost the same thing. Cooperativism is not only a form of business organization, but it’s also a philosophy and a lifestyle that has its focus on people and society. Pehuén is a member at Nayra, where he shares his values and principles with five other partners. This way he gets to practice his profession in a much more pleasant manner. Furthermore, the bond between his family and his company is something that he never experienced as an employee.Nayra is also a partner at FACTTIC, the Argentinean Federation of Work Cooperatives of Technologies, Innovation and Knowledge. There it shares projects and values with over 25 cooperatives from all over the country. This doesn’t mean that, at times, work can be overwhelming, especially in COVID-19 times. That is why he always makes sure to find moments to play sports, meditate and spend time with his family.

Something to keep working on

We asked Pehuén what he thinks could collaborate with more people to become interested in BEAM technologies. In his opinion, and as constructive criticism, something more people should talk about and debate is Erlang documentation. As a fervent defender of the ecosystem technologies, he thinks Erlang has many advantages and technological attractions. However, he notes that its documentation is a bit unwelcoming to the uninitiated, especially compared to other languages that saw technical marketing as a tool to attract new developers.Still, he wouldn’t trade BEAM technologies for anything.

We're eager to hear your stories, please share them at marcom@erlef.org !