Welcome to Meet the Sponsors, a new blog posts series in which you will learn about our sponsors and why they decide to support this great community. Today we will get to know Mainmatter. Enjoy it! 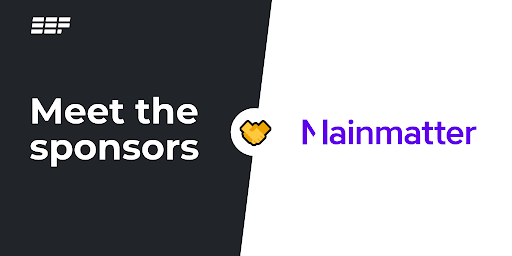 Mainmatter is a web development consultancy covering all aspects of digital product development from strategy to design and implementation. They not only develop products for clients, but also augment and mentor development teams. They have a focus on JavaScript and frontend as well as backend with Elixir and Rust.

Mainmatter started out as simplabs over 7 years ago. Its founder and Managing Director, Marco Otte-Witte, explains that it began as a personal project whose name was a combination of “simplicity” and an arbitrary suffix of “labs”, that was in fashion at the time. Today, the team consists of more than 20 people in 11 countries and have completed more than 30 successful projects. This made them want to transform the brand and make it as professional as the company already is.

“Mainmatter” represents its main value: supporting clients in having a stronger focus on whatever is their main matter. From augmenting technology teams and helping them deliver results on time and with quality, helping companies ship products while building the foundation to support their future evolution and maintenance or mentoring teams to be more efficient in the long term.

You can read more about the rebranding process in Marco’s recent blog post.

They came across Elixir from Rails as a natural next step. Since Elixir’s syntax was relatively familiar to them from Ruby and many concepts in Phoenix were similar, the transition was relatively kind. Over time, the team got more into Elixir’s more advanced capabilities. Elixir has since become an important element in their toolbox, where it coexists with Rust, in many cases in the same projects.

Nowadays, when they work on full stack projects, they use Elixir and Phoenix as an API backend mostly and the frontends are implemented as SPAs then. In addition, Mainmatter advises teams using Elixir in every possible way.

About sponsoring the foundation

Being closely involved with the communities and ecosystems behind the technologies in which they specialize is a very important part of Mainmatter’s culture. Therefore, they decided to join the Erlang Ecosystem Foundation, sponsor the Ember.js project, are a Silver Member of the Rust Foundation and organize international conferences.

Mainmatter believes that open source foundations can bring value to their communities in two areas: On the one hand, in supporting and coordinating the progress of the respective technologies, for example, through working groups. On the other hand, in the magnification of their community. They firmly believe that a thriving and growing community is the key to the longevity and success of any ecosystem.

A little more about Mainmatter

The company was founded in 2015 and works fully remote with team members from 11 different countries. Over the course of the years, they have worked on several projects with companies of all sizes: start-ups, scale-ups, and corporates, mainly from Europe and the US.

For more information, take a look at their website.

Our foundation is supported by the funding of our sponsors, and it is what allows us to carry out projects, marketing initiatives, stipends programs, and accomplish the goals that we have established as an organization. So if you are interested in becoming a sponsor, contact us at sponsorship@erlef.org. We look forward to hearing from you!